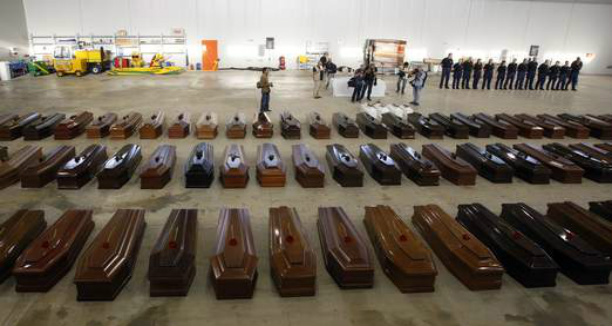 The Last 14 Days In My Eyes

Of the four Horsemen of the Apocalypse, the one named War has gone. But Famine, Pestilence, and Death are still charging over the world. Hunger is a silent visitor who comes like a shadow. He sits beside every anxious mother three times a day. He brings not alone suffering and sorrow, but fear and terror. He carries disorder and Paralysis of government. He is more destructive than armies: not only in human life, but in morale. All of the values of right living melt before his invasion and every gain of civilization crumbles. BUT WE CAN SAVE THESE PEOPLE FROM THE WORST – IF WE WILL!

Here under are the issues that weigh most in my thought during the last two weeks.

The TRAGEDY of Lampedusa:

Almost 400 people are confirmed to have died in the two incidents that occurred when overcrowded boats carrying people from East Africa capsized near the Italian island of Lampedusa. Right on this paper, once again, my heartfelt grief goes to all those who lost their lives. I also feel impelled to show much respect for Lampedusa residents who generously host the survived migrants.

No logic blames migrants when they knowingly risk their lives by surfing fatal storms on shattered boats. Most of the infamous human rights violations of this era, which have tended to be viewed as sadistic acts are being carried out by undemocratic regimes in the horn of Africa. As DDT is for insects, their racial economic and political policies have become “biocides” to humans. People from Somalia, Eritrea, and Ethiopia have reason to flee this zone where their difference in outlook or race makes them a legal prey. Nevertheless, what makes me sad is that sometimes these people fail to make it and become a “profit” for disaster capitalists, who are experts on making bucks out of shocks.

Since 1988, almost 20,000 people have died in desperate attempts to cross Mediterranean, which makes the sea a true graveyard for migrants. If Europe was really concerned for such a painful loss, by now, refugees’ boat accidents would have become history like smallpox. However, our world disaster capitalists are convinced that only a great rapture like a flood, a war, a terrorist attack, coups d’état, and natural disasters can generate the kind of open check they crave for. It is these malleable moments, when the majorities are psychologically unmoored and physically shocked, that these disaster capitalists plunge in their hands and begin their work of remaking the world; generate rough policies, adding new zeros to their Swiss balance. How many corporatist who provide food, shelter, clothes, transport, health and other services to refugees are making fortunes in our names is anybody’s guess

Let me cite just one instance. During New Orleans catastrophe, Richard Baker, a prominent Republican congress man from the city heard to say “We finally cleaned up public housing in New Orleans. We couldn’t do it but God did it;” and to his shame, another wealthiest developer from the same city embraced the situation and expressed similar sentiment: “I think we have a clean sheet to start again. And with that clean sheet we have some big opportunities.” Yes! whether we like it or not, this is our world’s reality. Poor men’s calamity has become rich men’s opportunity.

After the Lampedusa accident, Mr. José Manuel Barroso, the president of the European Commission visited hundreds of coffins that have been arranged in rows and said he was “profoundly shocked” and saddened by the view, especially the little coffins for children. Then came the “shock treatment” … blessing for the riches out of the poor’s suffering. He announced that Italy would receive an additional 30 million Euros, or $40.5 million, from the union to help deal with refugees.

From African dictators to the western corporate traffickers, from the migration deal brokers to the immigration policy makers and service providers, money has probably never been easier to obtain than it is today. With no complicated projects to administer and with no messy accounts to keep, they reap more than they dream. All what they have to do is simply screwing the poor. The truth is, we are sick and tired of being used as ping-pong between African dictators and Western money makers.

Fortunately, all these dramas that have been playing on our names for years are not hidden from us or from Lampedusa residents who were shouting “Assassins!” “Clowns!” and “Shame!” while showing pictures of migrants perched on ratty fishing boats when Mr. Barroso, and other Italy’s top officials arrived at the airport.

Our so called “world leaders” need to be told the truth. We must confront them that they are no more crafty now to hide the truth we are after. They need to know what we know as they are a savage deaf to justice and blind to law; trading human lives for personal and institutional wealth. Joseph Muscat, a former Member of the European Parliament and the current PM of Malta said “when there was a financial crisis, rightly so, all Europe pulled together and we all forked out our share to make sure that other countries didn’t go down.” He continued, “right now, we have a humanitarian crisis and I hope that, for Europe, money is not worth more than people’s lives.“

What comes out of EU summit on 24-25 October 2013 is eagerly waited. Right on the tragedy field, Mr Barroso has said “we will do anything we can, with the means that we have, to change the situation.” Sure, we need to see something concrete to stop this tragedy. Top officials site visit in freshly ironed suits and their mere discourse worth nothing more than those pity words on hallmark cards. It does not balm the sore or consoles the grief we have.

Just like the most fertile land, our most idle presidency seat has also been leased to China for the next six years. Apart from pleasing EPRDF’s Chinese masters, the selection is nothing more than shifting EPRDF’s game from heavy weight (Ato Girma W. Giorgis) to middle weight (Dr Mulatu  Teshome) boxing. No change to the rule or law except the kilo.

Some people feel comfortable with the presidency believing that he is out of the “dominant” race and belongs to Oromia. However, to my own personal thought, allocating that authoritative seat to Dr. Mulat has no merit for Oromo people than to the Far East. Placing western university trained scholars in high offices, as it is seen in Middle East and East Europe, is a common political phenomenon of greasing the socio-economic relations as well as lubricating geo-political bureaucratic functions with the “war or recession-time partners.” Otherwise, the new appointee can not be more careless to target the needs and rights of the locals.

Anyways, I am not going to spend much time on this issue as any trained monkey can effectively assume the duty and responsibility of the president stated in the constitution, article number 71.

Ginbot 7’s New Paradigm about Eritrea and the “opposition”:

Some days in the last two weeks, I heard a radio interview program and the verbal war between Ginbot 7 and the other group, including “Shengo” that question Ginbot 7’s new paradigm on Eritrea, seems to gain a momentum.

I know that it will be impossible to get all groups to agree on the matter. Yet, there is a possibility to have all groups to discuss the matter on more civilized manner than blaming one another. Like before, still today my devotion to Ginbot 7‘s involvement in armed struggle is beyond question. However, I love to see the leaders to buckle down and sort out the difference before loosing their grace. Demeaning each other using locker-room language helps no one except our enemies who love to see us ending in pieces.

Those who curse our unity said they have already given us a homework that lasts for a century (100 years.) Whether it is out of ignorance or greed, with all this filthy fight, we are making the “homework” a millennium (1000 years) assignment. Both groups’ leaders and supporters should leave this party-affiliated verbal taekwondo and become one voice to orchestrate the final crescendo to tomb EPRDF. Otherwise, if the offence goes like this, Ginbot 7 is only 13 days left to reach Ginbot 20. It is demanding to think and act early as in any form of failure there is no such a pretext called technical defeat but tactical retreat to save the face. By the same token, those who are skeptical for Eritrea’s merit in our freedom fight shall open their eyes and ears to examine the new trend instead of being simply laggards.

At last comes the Sport:

It is also in the last week that we hosted the Nigerian national team and lost the game for 2-1. Though it was really painful to lose the point, our boys were magnificent. Wishing them better luck and result for the next upcoming match, I must admit that the current national team really seems “developmental” (“limatawi buden”)