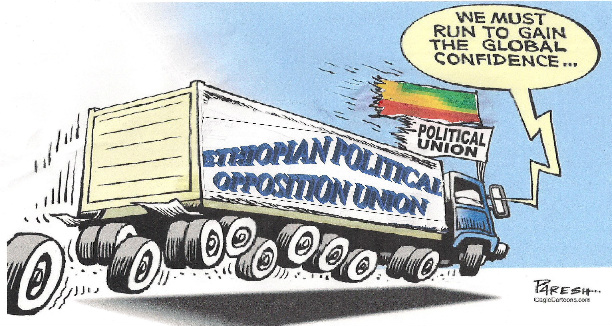 Creative destruction is our middle name, both within our own society and abroad. We tear down the old order everyday, from business to science, literature, art, architecture, and cinema to politics and the law. … they must attack us in order to survive, just as we must destroy them to advance our historic mission.

Michael Ledeen, the war against the Terror Masters, 2002.

It is my own belief that during unstable environment of struggle, having a number of political parties is not a blessing; rather a curse and I do not count it with a smiling face. As if opposition parties are saints or spiritual martyrs, I wonder why all this entire race to take their number far to 44. Some might think it is the oppression that creates conducive environment for such a high number of political parties. Count me out, because I believe it as EPRDF’s tactful resistance management to fragment the oppositions’ impact. 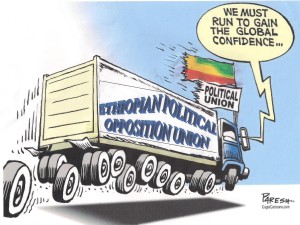 Let us be honest and answer how many days of meetings and conferences have been wasted discussing a means to bring those different oppositions parties together than designing worthy strategies to uproot the dictatorial government? More than 60 percent of our resources (name it time, money and/or energy) that could have been used to enforce the resistance are being invested on days long seminars to create “cooperation” between and among more than enough opposition wings. Who is benefited out of this? The oppositions? The poor Ethiopians? The answer is yours; mine is EPRDF which is enjoying the lion share of this difference.

Here, one can not mislead himself saying “variety is beauty.”  The beauty of variety in a struggle is realized only when it is expressed in ONE PLACE across gender, sex, religion and race. Diversity in a struggle becomes fruitful when people or opposition parties with various racial, ethnic, socioeconomic, and cultural backgrounds dissolve their difference to fight and fall at ONE battle ground, for one goal. As of me, diversity is not tolerance for difference but merging of boundaries to co-exist together. Its strength measured how the intensity of its mosaic nature fades to look alike. I hope we all understand the logic behind: “THE WHOLE IS GREATER THAN THE SUM OF ITS PARTS.”

Save me the need to unite our political parties which are based on nation and nationalities for other time and let me proceed on discussing the significance of mating the Muslims’ and the Christians’ movements to create a strong, hybrid revolt. Some might prefer riot over revolt. All that I can say is, we are not out against evil spirit. We are freedom fighters not exhortation practitioners; neither the CROSS of Christians nor the MISBAHA of Muslims could buy us our very rights in separate, decent fights. The enemy we are fighting in common is a group of pagans that worship the Almighty of guns. Nothing could balance the trade with this death merchant government except our ALL in ONE revolt.

Both Christians and Muslims must realize, in unstable state of politics, difference can not be strength. While mobilizing a revolution, a struggle based on sectoral variety is not beauty but a mole to unity. If we keep such a separate lane of movement, no loss of life will be honored as a martyr but will be ridiculed as a fool. We live and die disinherited, like those described by the German Poet Rainer Maria Rilke as “ones to whom neither the past nor the future belongs.”

Here, I am not undermining the Muslims’ movement (DIMTSACHIN YISEMA) or the valuable inputs they are making in different political opposition parties. But, let us upgrade our cooperation from MULTI to INTER RELATED revolution. It is only then, when our unity overcomes our diversity that we could see the dawn of freedom and democracy so early.

Just a day before, I was present in a group of people discussing the Muslims’ movement and the support it receives from the Christian brothers and sisters. My antennae received a vibe of grudge for failing each other; and that is why I came out with this paper.

No doubt, our Muslim brothers and sisters are not dealt right; however, it does not make me feel EPRDF’s treatment towards other forms of belief and faith is just. The difference on the load of oppression that bends down our nation, in religion or tribe wise, is not of KIND but DEGREE. Of course, I am not blind to deny the fact that one tribe could be less oppressed than the rest or one religion is more infiltrated than the other. Yet, the oppression is there in all categories of race and religion to call for nation wide revolution.

Let us face the truth. When the neck of Christian nuns and monks were broken as bamboos in monasteries, Muslim brothers and sisters might not heard shouting loud. On the other hand, when the ruthless guns roared like fireworks on Eid holiday and killed innocents, Christians might fail to show a firm stand. Unfortunately, beyond the realm of religion, the situation is the same regarding one opposition party’s response towards the stimulus triggered on the other(s). No one denies that we have lived so long as a passive keyboard, waiting till our buttons pressed. However, showing the vacuum that created in the past does not help the common role we have to play together at this very moment.

These sectoral courses of resistance take us no where. Not a single strategy of struggle is eternal. There is time when one strategy is useful and other time it becomes outdated and must be abandoned. The old revolutionary movements based on religion, nation and nationalities have to shed its old skin and be born anew. EPRDF’s political and economic malware is causing trouble everyone, everywhere. Lets us give up blaming each other and start flaming the public anger. Let us be willing a soluble solute and solvent to create a strong solution of revolt. To maximize the force of our revolution, we need to minimize the diameter of the pipe (reduce the number of political parties and sectoral movements) it flows through.

Before closing, I shall address our Lords of disgrace. Let me welcome you to the 21st century. BOOTS on the ground is not always the only possible choice to get rid of dictators. Take a look of what happened in North Africa: Egypt, Tunisia and Libya. The mass have acquired what they desired through a new kind of revolution called FEET on the ground. Your own eyes witnessed civilians’ feet on the streets overcame soldiers’ boots on the ground; toppled down a three decades old throne from the top of its pyramid. You can not walk far by maximizing the fear factor. It is the genes, not the guns, which have enormous factor in human behavior and personality to give you acceptable leadership quality.