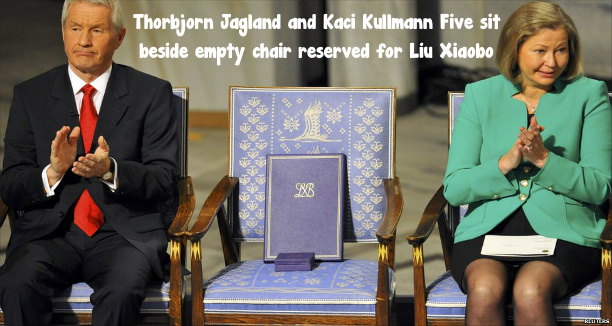 For the first time in its century old history, the Noble Peace Prize committee chair has been booted out by right-wingers. Thorbjørn Jagland, chairperson of the committee since 2009 has been demoted last Tuesday and reportedly left the Nobel Institute through a back door.

Media men quoted the ousted leader to say: “those elected from the Conservative and Progress parties in parliament have chosen a new committee chairman and won a majority. I must relate to that.” Sure you must; and I must say it is a peaceful coup that itself deserves a noble peace prize.

In fact, who goes, who comes, it is not and it will not be my interest. It has been long since the Noble has become a novel, something far from its founding principle. To my eyes, the Norwegian Noble Peace Prize institute is nothing less and nothing more than a political party. Except a very few, almost all decisions that have been made in the past to honor the winners were politically maneuvered. When it comes to the people who are playing the leading role in nominating and honoring the contenders, I see no human feeling in their hearts, no sound sense in their heads, that could match the will and interest of Noble Alfred. The whole process and motivation behind the prize is a political sham if not shame.

In 2012, the committee awarded the prize to the European Union while the bloc was busy in wounding, maiming, and killing business far from its axis in North Africa and Middle East. That time, I said: now the Noble medal has become a title for a Field Marshal. The 1984 Noble Peace Prize winner, Reverend Desmond Tutu, and other two laureates slammed the decision and wrote an open letter that “The EU is clearly not the ‘champion of peace’ that Alfred Nobel had in mind when he wrote his will.” C’mon guys … what is wrong if a man’s right hand ties a one-million-dollar Hublot watch to his left wrist? Hope you got me here 😉

After the Norwegian Noble Peace committee awarded the 2010 prize to Liu Xiaobo, Beijing has not been happy with Oslo. It is also logical if one formulates the Chinese’s pressure on Thorbjørn Jagland replacement. Last year, one of the Norwegian newspapers, Dagens Næringsliv (Daily Life/Business (in my own interpretation)), reported former Prime Minister of Norway, Jens Stoltenberg, has dealt a secret document with China to normalize the two countries’ diplomatic relations. The document, which was meant to be secret have “formulations” that China would interpret it as an admission from the Norwegian side that Liu Xiaobo was a “wrong” candidate and a “mistaken” winner for the Noble Peace Prize. The document that termed “non-paper” in diplomatic language, as it bears no governmental letterheads and signatures, is now sealed in the Norwegian National Archive for three decades.

What fascinated me more is that, according to Dagens Næringsliv newspaper, the document contained “an understanding” that Norway has promised to make sure no other Chinese dissidents would receive the Peace Prize in the future to upset the emerging economic monster, and if Liu Xiaobo is released from prison, he would not be welcomed in the Norwegians capital to collect his Prize. Here we go, Oslo …

In my own personal judgement, the Noble Peace Prize is nothing more than a stimulus package for Norway’s international political and economic interest. Do not get me wrong! As long as the players have fear of God/Allah and the game is fairly ruled, I do accept playing politics anywhere in the world, at any social or economic institution. It is something that we can not avoid it in our lives. Politics itself is life, science, wisdomic art! Only when Atheists play it that it becomes a witchcraft.

Let me share you a story from my old archive to finalize the paper. One Thursday noon in 2007, a group of reporters were gathering in front of a small house in North London suburb, waiting for 88-years-old Doris Lessing. When the black cab pulled up, the news men rushed to the passenger seat and broke the “good news” that she had won the Nobel Prize for literature. To their surprise, the old woman responded, “Oh Christ … I couldn’t care less.” The British novelist, poet, and playwright continued “I can’t say I’m overwhelmed with surprise, I’m 88 years old and they can’t give the Nobel to someone who’s dead, so I think they were probably thinking they’d probably better give it to me now before I’ve popped off.” While being circled by men and women of the international media, Lessing was dismissive of the Nobel, calling the award process graceless and saying the prize “doesn’t mean anything artistically.”

She could be right. May be the Noble Literature wing had taken a lesson from the Noble Peace committee that omitted the old Mahatma Gandhi from its family. Even if the Noble Peace Prize was started in 1901, forty-seven years before the death of the Indians’ Babu (Father/Papa), Gandhi (79) was not given the honor which Laureate Malala earned just at seventeen.

What I have learnt from Doris Lessing is that when you find no value in the subject, you do not care for the object. When you know the reward-er very well as a pathological pretender, the gold bar in his hand is nothing more than a rusty metal. Leave aside we who have lived years to know these leaders, anyone that lived a month of his life in their savage cage can witness the novelty of their humanity, the fictional nature of their endeavor for international fraternity. I personally have no doubt that if these politicians see any economic opportunity in the kingdom of Hell, they would not care to laurel Lucifer as a Noble Peace Prize winner.

As it is customary to greet a new appointee; let me say Hi-5 to Kaci Kullmann Five. Whether she comes with her winner from the Ku Klux Klan or not, let us be patient with the right-winger till December.