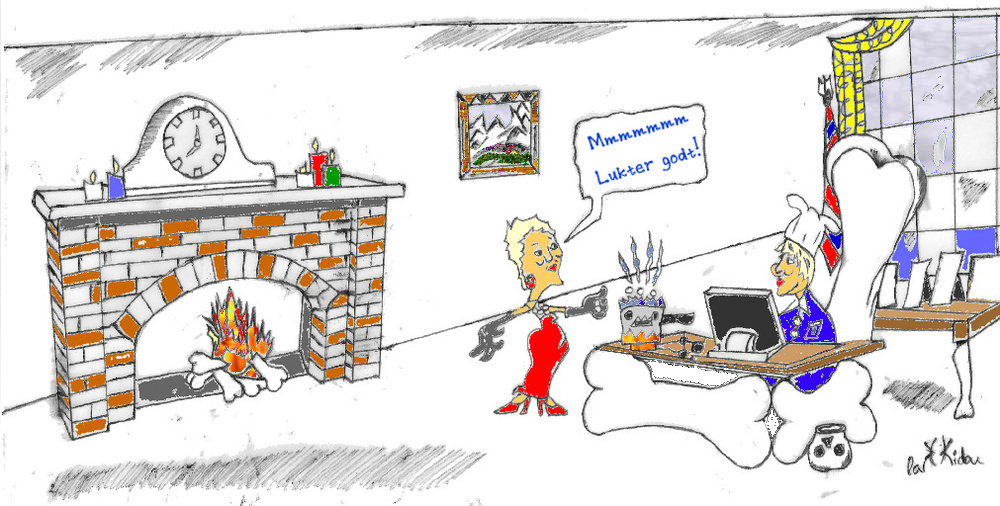 In fact, through a continuous evolutionary process started four million years ago BC of Australopithecus ramidus to the present Homo sapiens, scientists have demonstrated significant anatomical and morphological changes in human body. However, none of these changes suggested evolution of bone and skin to bronze and steel. What logic on earth could rationalize this inhumane decision to throw out asylum seekers who are human and full of sensory neurons to feel hunger and chill in extreme arctic zone?

(Gleaned from a letter I wrote to a group of researchers in Oslo who were out in a mission to study “the possible effect of annulling allowance (food and shelter) for case rejected asylum seekers (10 February 2005.) A week later, I met the researchers in a place where I live. We had uneasy discussion and the lady in the group told me to “sit and wait quite” as I was not in the “targeted group.”)

For several years, Norsk politicians have been praised as peace-engineers, pathfinders for peaceful talks among political factions across the continents. The country’s decision makers are also known for channelling a huge sum of money to humanitarian activity. But, do they really deserve the praise? Or are they playing us a propagandists’ game that called euphemism?

Euphemism is one of propaganda techniques to pacify the audience in order to make unpleasant reality more palatable by using words that are bland and euphemistic. For instance, in 1940’s, America changed the name of War Department to the Department of Defence. During the Ronald Regan administration, the MX-Missile was renamed “The Peacekeeper.” What kind of warheads could represent our peace makers, then?

No one denies Norway’s humanitarian attitude has been replaced by the vote-seeking cynicism of its politicians. Their mere act as God-sent angels in Geneva UNHCR headquarter while boiling refugees in their homeland is meaningless for everything except for the title of this article.

We, asylum seekers have become smokeless firewood for these immigrant-phobic politicians. They burn our bone to warm their house. It is our pain and death that give and secure them a political office. They make their chairs and tables out of our bones.

The two major parities which have the lion share in the current coalition government are known for their hostile attitude towards immigrants. Particularly, the right-wing party (Fremskrittspartiet / Progress party) has a well documented history of this acrimony. “In 1997, The party made its headway in the general election, getting 15,3% of the votes mainly because the party leader, Carl I. Hagen and the MPs Oeystein Hedstroem and Vidar Kleppe played the immigration card during the election campaign” (Monitor report, written for Centre of Research and Action on Racism and anti-Semitism (CERA).)

Likewise, in the last ten years, asylum seekers have been guinea pigs of Erna Solberg’s creative punishments. Still our body suffers the sore she inflicted us while being a Communal Minister, and no one knows what kind of soup she is cooking us today as the Prime Minister of Norway. As you have seen on the cartoon above, the office (the kitchen) that we have been grilled for decades has never seen such a perfect team of chefs to cook us EXTRA HOT dish. It is anyone’s guess how chilli it could taste when Høyre sour curry mix up with Fremesker pepper. Woe us Heaven for falling in Hell!

On the land usually considered as the tip of the world, the suffering we have been enduring is beyond any one’s imagination. Especially, when the rest of the world is unable to hear and read the language how asylums are being discussed and misjudged, the damage is ten folds. Honestly speaking, leave aside the outsiders, most of the ordinary citizens are unaware of how deep we are being grilled in that kitchen. Every time when they hear our story, it is hard for them to believe such inhumanity is committed in their own country. The horror is done inside a well fortified wall. It is impossible for these citizens to penetrate and see it all. Sometimes, when I meditate on the range of behavior between the ordinary Norwegian society and the profane politicians, I feel like there are two nations behind one flag.

Just a few days ago, even before the framework is agreed by the four parties that formed the coalition government, the Attorney General Anders Anundsen (Progressive Party (FRP)) rushed and told UDI (the Immigration Directorate) to start work on the new asylum receiving structure; which is belived to segregate asylum seekers and camps based on application made and decision given by the subject and the concerned office respectively.

Fellow brothers and sisters, the lady in the blue gown is a well known surgeon, the one who cuts your gut in half with a lacerating knife. In simple words, it is her strong fingers that choked your esophagus, reduced your fortnight allowance. Here, I just wanted to warn and get you ready for the cruelty. Otherwise, there is no one but me who know the power of money. It can buy fish but not appetite, warmth but not sleep at night. Those who have a twisted mind must understand why I brought this up.

Madam-in-“chef” (Commander-in-Chief), we are tired and battered than ever now. Our refugee camp has become a bedlam. If you do not trust us, like the Norwegian Police Academy text claims “It is very easy to believe that Africans are pathological liars,” the officials who are in charge of the health care service are our live witnesses. Otherwise, as seeing is believing, you are most welcome here if you ever dare to visit ghosts or to walk among half dead. If we have to be dislocated, it should not be from the refugee camp where we are living the worse to a newly proposed “concentration” camp to live the worst. Rather; if we are lucky enough to win your elusive sympathy, the only place you should move us today is to hospitals where we can get treatment to the physiological and psychological diseases and disorders we are suffering for eternity. As we are sick and weak, we do not deserve policemen with baton and handcuff to execute the eviction, but doctors and nurses with stethoscope and pain-killer to give us medical examination.

I know, it is your land and it is your law. You can bend or even break it wherever you want against the international convention of human right. But, no earthly power is capable to curve my spirit to the slightest possible degree of silence. Though I am denied a respectable human life, honorable death is always in my hands. I can embrace it any time, in any given place. As long as truth with its two edged sword is on my side, I am not alone or afraid to stand against all odds of the evil world.

For sure, Her Excellency Erna Solberg has earned Margaret Thatcher‘s nick name as JERN-ERNA (Iron-Erna (The Iron Lady).) Yet, it is my hope that she will not send her police officers against me and other poor asylum seekers to get us out from the only shelter we have; like Mrs Margaret Thatcher sent marines against a “fascist junta” for Falklands Expedition in the early 1980’s; or as Mr John Howard of Australia who sent a frigate against a few hundred refugees on MV Tampa. If she does, we are sure of one thing. The Norwegian police officers will not come to us in the evening; because, the Norwegian Police Academy has been officially teaching its recruits: “[in Africa] the night is enveloped with superstition. Do not knock on the door of an African [living in Norway] at night. He will not open in fear of being visited by an evil spirit.“

Let me devote my last paragraph for those who claim to lead us. For our community and political organization leaders in Norway who have been selling us for several years to their own personal interest. There is a few words I must whisper to your challenged ears, a few images I shall unveil to your blind eyes. Wait me, I will be back in less than a week.