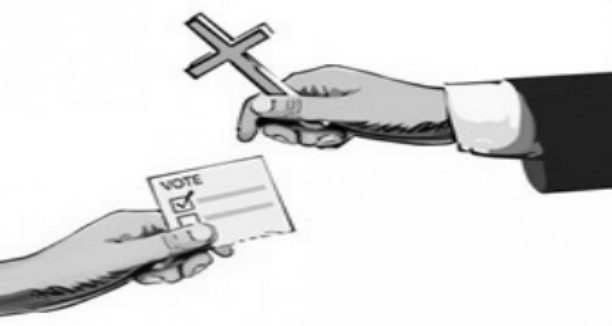 Politics Is Not Sin To Avoid Practicing

I am going to start this politics spiced religious paper with a concept of chemistry, IONIZATION process. Some still think science is against God or religion. However; it is not science which is against God, but a few scientists. For those who pay worthy attention, Bible is full of scientific laws, postulates, theorems, theories, and principles. Religious realities are still serving as hypothesis for basic scientific findings. As the result, I say, the duty of scientists is nothing but to DISCOVER what God has CREATED before.

Chemistry defines ion-ization as a process by which an atom or a molecule acquires a charge (ion.) In my own religious analogy, Christmas is the IAN-ization process for Christ by which He received flesh, blood, skin, and bone to become human. In other terms, Christ added the suffix ian to become a Christian. That is why I coined the term ian-ization.

“Since the children have flesh and blood, he too shared in their humanity so that by his death he might break the power of him who holds the power of death.” Hebrew 214

Whereas, Easter is a DE-IAN-zation process for a Christian by which he or she removes the suffix ian to become Christ. In this reversal process of ianization (de-ianization or Easter) we, Christians are given the likeness of Christ and become children of God. It is the death of Christ that transformed us to be a born again Christian, to die His death symbolically so that we can live His life. I MUST make myself clear that in de-ian-ization process, a Christian drops the last three letters (ian) to become Christ, not in being but in spirit.

“And I will ask the Father, and he will give you another advocate to help you and be with you forever – the Spirit of truth. … for he lives with you and will be in you. Because I live, you also will live. On that day you will realize that I am in my Father, and you are in me, and I am in you.” John 1416-21

Still reserving a wide room for those who might negate my perception as a philosophical or diabolical concept, there is no doubt that Christians should emulate Christ. If we agree on this, Christians in seeking to imitate Him inevitably become politicians to work with and for people.

Some hypocritically pious believers think it is improper to discuss religion in connection with politics. They often draw their argument on a verse that Jesus was quoted to say “Then render to Caesar the things that are Caesar’s; and to God the things that are God’s” Matthew 2221. In my understanding, the verse does not recommend religion or religious people to stay far from politics; rather, to settle religious and political issues in accordance of the existing, acceptable social norm.

Apart The Roman dynasty, a strong campaign to detach religion from politics traced back to Hitler’s time. Adolf Hitler had a strong desire to exterminate “God’s people” from the face of Europe, if not from the entire world, that he told Germany’s church leaders to stay away from politics. As he was the most fearful person, they lived by his rule and were very careful to mind their own rituals not to interfere in the mass-murder of millions. Since then, politics became ignoble profession in the eyes of religious people. Otherwise; if we spring back two thousandth years ago, the birth, life, and death of Jesus Christ were much of politics. He was in a constant conflict with politicians, kings and church leaders who were politically influential as well. I am not going to discuss what has happened between Jesus Christ and King Herod, the Romans, or Pontius Pilate. Yet, I would remind you that it was nothing else except politics.

Even if people have been wishing politics-free religion for centuries, it coud not occur for a year. With so many issues like abortion, same sex marriage, dressing code,  and so on, it is impossible to dream a land where religion and politics exist side by side without overlapping. Never; that was not the trend and I do not think it will be either. I personally believe that The Ten Commandments are the first human, and the only political constitution engraved on stone. How can religion or religious people avoid politics as long as politics is nothing but the way in which social life is organized and administered? The term Politics itself came from the Greek word “polis“ which means city, people. Is it possible to picture religion without people? Is it sin for a Christian man or woman to become a police officer or politician?

The main theme of my paper today is that politics is not a sin to avoid practicing; and religious people have to organize themselves and take part in political act or revolt. As Jesus advocated unity and fellowship to claim what we lack, we must stand together to get back our God-given right. We are told the power of UNITY; the blessing of being two or more to be heard. Therefore, it is time to stand together in accord of one heart, to talk in one mouth. Matthew 1820 “For where two or three gather in my name, there am I with them.”

Unity for liberty must not be based on race but on a common cause. It is God’s wish that we love our neighbor and show tolerance to differ. He who made us does not care for who we are but for what we do. As it is revealed in the revelation, His flocks are selected from different tribes, tongues and nation. Revelation 59 “You are worthy to take the scroll and to open its seals, because you were slain, and with your blood you purchased for God persons from every tribe and language and people and nation.”

Regarding what is happening in our country, a very few of us may not be affected today; yet, we shall not be ignorant for others’ plight. Jesus was critical of those who lived for self, family or tribe. He was against segregation among humans and inappropriate distributions of power. Moses is additional model for you and me to break the silence, to say ENOUGH when many live and perish in slavery. As Christians that should relive Christ, we must respect life. We have to harness our selfishness and insatiable mortal flesh. Every soul worth the ransom paid, His blood, that we shall not jump over corpses in search of secular wealth. It is only when we die for equality, dignity and worth of all people that we earn the everlasting life.

The crucifixion of Christ is a symbolic lesson that our mission on earth must not be self safety. The crosses that we wear around our necks do not make us followers of Christ, but our action and devotion to His cause. It is not sin to oppose devil possessed dictators who desecrate the most sacred, life. We have to stand together as bold army of faith to fight those hands that carry guns to sow death. More than ever, it is today that we shall join our faith across denomination to destroy the hell recruits, to raze the darkness evil born racists.

If we wish to see spiritualism blooming at the cost of secularism, we must stop loathing politics as a sin. Christ preached on respect for the rights and equality of people. As His followers, we are expected not only to talk but also to walk politics; to be stakeholders in generating and enforcing policies that transform the poor and their barren farm. Of course, it is up to the Almighty God to shower rain on dry land. Even so, there are ways we can do to break free from hunger arm. It is POLICY, not PROPHECY that could deliver our farmers seeds to sow on their palm, water for irrigation in their dam. It is neither environment nor nature but politics which is in charge of Ethiopia’s poverty. Unless we stand firm and start to decide how the resources should be managed and distributed, there is no magic or miracle to save our face from begging shame. My Christian brothers and sisters, it is not an act of faith to sit idle in a dark room and wait for Christ’s miraculous fingers that lightened the Jericho’s blind. We must take what we can in our own hand!

Finally it is my prayer on this Easter that …

May: The lost get back to Him … cast off their atheism; His omnipotent hands be and live among us, to give us endurance, for sin deliverance;

May: The light of Zion shine upon the world’s darkness, joy over sadness; fellowship civilize over loneliness;

May: The incarcerated be freed, the displaced be relocated, the hungered have some to wet their mouth and glorify His name;

May: Our children grow in warm love of family; young couples walk one to one in harmony and reach the faith Father, Abraham’s destiny;

May: The Laughter of a baby fill the quite house of infertile; His Fatherly love and care warm the cold cottage of orphans;

May: His extensive forgiveness fill our universe, deliver us from all diseases, virulent viral curse that we are dying in mass for the commandment we transgressed;

May: Love prevail on hatred, peace blunt the spearhead. Until the end … till His day of advent,

May we live in peace … in this LIFE for RENT!