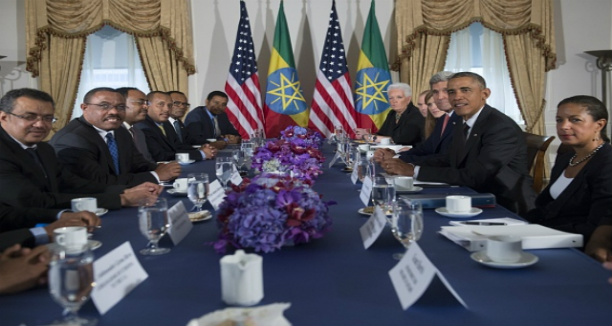 The President Playing: The Beast and The False Prophet

The beast I saw resembled a leopard, but had feet like those of a bear and a mouth like that of a lion … The dragon gave the beast his power and his throne and great authority … The whole world was filled with wonder and followed the beast. People worshiped the dragon because he had given authority to the beast, and they also worshiped the beast and asked, “Who is like the beast? Who can wage war against it?”

The beast was given a mouth to utter proud words … and to exercise its authority for forty-two months … And it was given authority over every tribe, people, language and nation. All inhabitants of the earth will worship the beast. Revelation 13

The moment I saw the above picture, my mind raced to caption it with Paul O’Neill’s phrase: A blind man in a room full of deaf people. Former US Treasury Secretary, Paul O’Neill said so in characterizing cabinet meetings with former President George Bush.

I guess a few people rolled their eyes when horror of horrors honored in New York. However, most of us who are familiar to the promiscuous political behavior of the west to bed dictators did not raise the eyebrows.

Even prior to the current political paradigm that upholds regional STABILITY over DEMOCRACY, the democratic United States has been and still is a key ally for undemocratic regimes. Across time and space, a variety of reasons have been given to sanctify this vicious love affair with authoritarian governments against the democratic value in their constitution. Oil, Security, war on terror, the reason goes on. Once, Former Secretary of State, Hillary Clinton summed up all the excuses and tried to justify it as “A BALANCE of ACT.” Yet, she overlooked the fact that the blood of the mass poor these dictators shed on the ground and their natural resources are also A BALANCED DIET for their free political and economic market.

I wonder which school of thought used the term DEVELOP-MENT interchangeably to refer DEVIL-MENT so that the evils worth President Obama’s praise. In deed; what we heard from New York is nothing but a rhetoric washing tone of Washington to whitewash its blood bathed, war-on-terror allies. Even so, this time, America is wrong. Leave aside its president’s hollow words, the whole world’s reserve of chlorine can not clean the bionic, blood stained machine gun hands of EPRDF.

The president’s shameful speech to extol unlawful killers, beyond border kidnappers, abyssal pocket looters, and torture architectures as a model for transformation painted him little unalike The Beast and The False Prophet in the Revelation. His action was just one more vindication to the excess that Western political market and Africans fight for human rights do not really mix. Since the time of Milton Friedman, Chicago boys are known to boil third world’s socio economic environment thereby create fatal political turmoil. As of me, right there on that table, who should have been mentioned as a model was Manuel Noriega of Panama; the trusty buddy of America. The man that Condy* called him “a good friend” just a few months before he summarily brought to the US and jailed as “a drug trafficker.” The main reason for his bloody and unlawful extradition was nothing else but his little interest to keep fighting the Sandinistas. If our black “Noriegas” ever dream to back off from fighting Al-Shabaab … Adios Diablo!

To run over this section, there is no surprise to the President’s foul act as it is not Michelle Obama but Ethiopian mothers who are burying their children beyond borders, in deserts and seas. It is not Americans but Ethiopians who are being exported like livestock to be slaughtered on Arabian land. It is not their teenage kid but ours that found herself in forced slavery in remote Indian village. Yes, we know that there was no and still there is no taste of altruistic democracy in America’s foreign policy. However, to liberalize their political trade, the mass poor shall not be slaved. Forgetting President Obama and its America, this is the time that shall give rise to the best of our fight against the regime. History teaches none of US backed dictators leave office on democratic vote but on massive revolt. By now, we have learnt that PUBLIC action surpasses INTERNATIONAL convention to ensure the birth of democracy.

The regime is on its last leg. The recent incident that took place at Ethiopian Embassy in DC confirms that the lid of the pressure cooker has come off. Right there where WE are betrayed, THEY are bewared that we are one step closer to close the racial ledger. Now, everyone who really cares for a lasting change must come out of his/her cage and be ready for A MASSIVE ACT. What I mean is: while giving credit for what have been done till now, let us think over deeply, net ourselves carefully, yeast the public attitude thoroughly, and take ONE BIG, FOCUSED ACTION … all in one!

1. TO TEAM UP AS ONE and AVOID WEAK COLLISIONS. We have to pack ourselves like a sardine irrespective of party affiliation, race, region, and religion for one big bang collision that could spark a freedom inferno. No matter how often we do it, small and weak collisions here and there, today and tomorrow, do us nothing good except sucking out the motivation gradually. Protesting in this manner can actually make us frustrated and burn our energy levels to zero in the long run. Besides, it provides a lesson to learn for the regime and that pumps up its moral for handling it “effectively.”

2. NOT TO OPPOSE FOR THE SAKE OF OPPOSITION but FOR TANGIBLE CHANGE. Opposition when administered in civil resistance or in peaceful struggle, it should be A PRIMARY MOTIVE (not secondary or auxiliary for any act.) I do support the Ethiopian Muslim movement (ድምፃችን ይሰማ); yet, I do not think they are giving it the required tone and aim when they do it on every Friday while they are gathering for praying. It simply downgrades their opposition to a secondary level (making the gathering for praying as primary.) In addition, staging opposition only on that particular day of a week is a BONUS for the regime to twist and evil its literal purpose. Do you ever think what would happen if that large gathering voluntarily take the street for opposition on any other day than Friday? The same interpretation holds true if Christians do their opposition while being gathered for Epiphany or any other spiritual or public holiday. The regime downgrades the strength and ridicules the magnitude of the opposition simply by attaching its MAIN cause to a ceremonial gathering.

3. TO YEAST THE PUBLIC SENTIMENT. This is an act of renewing and stirring public feeling. It is really rewarding to ferment the public sentiment to the required point before taking the big massive act. Well thought messages and slogans do the magic here. In addiction to the Hellenic trend of writing slogans and messages on every possible board from street walls to public transport seats, one can create classic methods to reach the public. Here, I could suggest a few techniques which I believe to be EFFICIENT to reach people in different walks of life. These methods are relatively SAFE to do the trick without being spotted.

Besides transmitting messages wide and loud, these methods incur huge cost and headache to the regime if it makes any move to scrutinize. Any effort to examine each bank note results delays in transaction (remember – time is money); any move to scan every book that shelved in a library demands labor; any feverish act to hunt down a flying slogan balloon (device) is simply bolding the message; the best and easy solution to get rid of a slogan written on a plate/ saucer is to smash it.

4. TO ACT ALL AT ONCE. What shall come at last is the long awaited BIG BANG. Once we get out on the street, that day must last forever unless there is one rule of law to all, indivisible liberty to all nation and nationalities. I have no doubt that if we overcome the divergence difficulty by pooling each and every opposition force to one canal, it does not take too long before President Obama rephrase his common rhetoric, word by word: “The people of “Ethiopia” have spoken. Their voices have been heard, and “Ethiopia” will never be the same.” … God Bless!

Assegid you have observed them very well how that the U.S playing on Africans wounds , I have really appreciate the your tips for civil resistance effectiveness and your creative new way of spreading disobedience in motivating the people how to use safe way pesticides for those Barackroach dictators , keep on moving Asseg appreciate it.

Many Thanks, Samson. I said it there, we MUST keep moving until the unwilling to move will be REMOVED. Stay blessed, Sam.