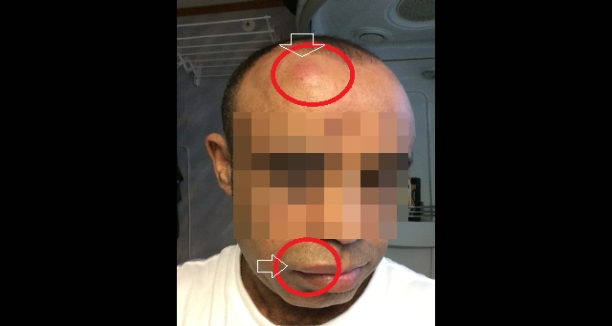 A Svolvaer Church as a Boxing Stage

“They know that I am deaf, unable to hear. I can not express my self without the help of others. Even so; I have knocked on all the doors, I have spoken to all the concerned people that could help me, give me relief from this pain I have been struggling day and night for the last six and half years. Those who have heard me have done nothing. Therefore, I sought a refugee in God’s house thinking that I might draw His attention. Believing … you know … somehow … God could help me in pushing and persuading the officials to do something. Honestly speaking, the greater portion of my hope was laid on the priest to cry my tears, to echo my woe. But …”
The man’s throat clogged up as he sobbed. So, let me continue. But, it went the other way round. The vicar/priest called the police to get the deaf man out.

A man sitting in front of me was an Eritrean asylum seeker, who put himself in a hunger-strike inside Svolvaer church. A day later, three police officers “assaulted, beaten,” and got him off in handcuffs. As he kept narrating me his ordeal, I was woolgathering the pulpit as a ring … having four big crosses, one at each corner supporting the strands of rope … the priest in the middle, with white latex gloves … . Then, all of a sudden, I fantasized the auditorium as the Romans Coliseum.

“You know … I went to the church and put myself in a hunger strike only to get the demanding medical help. But, the police officers were not interested to know anything. They didn’t even ask me why I was there. The moment they entered into the church, they headed directly to the place where I was sitting. When two of them stood a few meters away, one police officer took a few steps forward while pulling up his jacket sleeves to his arms, a body language that anyone would interpret it as a belligerent move to show zeal to fight. Then….”

With an ice cube in his right hand, he was massaging the reddish swollen part on his forehead. Now and then, he stopped to use his both hands to demonstrate me how those three police officers assaulted him: strangled him till the point he couldn’t breath, punched him in the face that he blacked out, and finally crushed him hard to the church floor where they treated him like a venomous serpent or some kind of loathsome insect. I wish I was there; at least to throw the towel to end this THREE against ONE boxing foul. I guess the man had no knowledge of the new game-rule cosigned by the Norwegian church and the police, which I would rather say a recently ratified agreement that could turn a church auditorium into a wrestling Coliseum at any given time.

A doctoral assessment made on the next day of the assault confirmed a genuine pain on the man’s pelvis bone and ligaments that stretch down to the hips. Even if no visible mark was reported on the area (below the bellybutton ,) the doctor has asserted that the man’s pelvic arch could be subjected to a considerable blow or crush to sustain internal inflammations.

Frankly, as I saw him sitting in front of me, the whole being of the man seemed noticeably broken into pieces. His eyes were full of tears, yet, they couldn’t block me to see a big hole in his soul. Alas, I had nothing to fill with! There was no time in my life that I wish to be a priest than that very moment. Not for any other merit but to elaborate the verse I mouthed him “blessed are they that mourn, for they shall be comforted.”

Although I was unlucky to miss that short but unforgettable “boxing match,” I was privileged to meet both contenders “behind the stage” after the final round. Without being informed, it took me just a second to know the winner(s.) Their ballooned chests and improper behavior painted the police officers as early days gladiators. Of course; they just fought and won one of Norway’s asylum seekers – humans diminished to the status of game animals.

Adding insult to injury, the local newspaper reported as if the handcuffed man was given a ride in a police car. No doubt that he is deaf, unable to hear; but not to read. I myself is a living witness that the ABC of journalism (Accuracy, Brevity, and Clarity) are gone in Lofotposten.

What has happened is nothing short of a political drama: the politicians killed Justice, the vicar/priest conducted the ritual, and the police officers buried it deep in the pit of hell. Otherwise, give me just one logic to rationalize treating a deaf person like a dummy, dealing a disabled man like a mannequin in Force Option Simulator training. If it is not a supreme folly, there is no sport in the entire realm of entertainment that THREE well-fed bodies, hard-trained muscles, ferociously fight against ONE hunger-paralyzed body.

To the best of my judgment, rather than phoning men of batons and handcuffs, the priest could have played it fair in negotiation to find Godly solution. It was only Judas, one of the twelve disciples, who relied on men of swords and clubs (Matthew 26:47.) The moment I found out it was the priest that called in the police, my nomadic mind illicitly crossed the border and entered Italy to remember Father Benigni. According to David Yallop‘s book, In God’s Name, Father Benigni of the Vatican was an informant and spy for the fascist Mussolini.

The deaf man in the church was a test for the vicar/priest to prove his grace, to assure his expertise, as the Ambassador of Heaven to earth. To my little knowledge of religion, a priest is the one to whom The Omnipotent reveals His wisdom and forbearance to deal the land in argument, misunderstanding, death, sorrow, divorce, misery, grief, hunger, lamentation, tear, despair … . A priest is a person of hope for the hopeless, a person of help for the helpless. He must be a holy man who smile and act as a father not only for all Christians but also for all people. It is demanding that a priest be totally free from a slightest taint of prejudice; never wheel and deal on regional, racial, or religious differences. Nothing more nothing less!

One may defend the vicar/priest as one earthly shepherd who has a fur/wool preference among his flock. Hope you understand what I mean here; but, that is not God’s will. Everyone is equal in His eyes, no matter of race and skin color. In fact, for so many reasons, I didn’t expect those police officers to show sympathy for the deaf man; rather a bit dignity for divinity, a little respect for the church.

Even if the Norwegian church is a state church, in principle and practice, the vicar (minister of the church) should be accountable to the majesty of Heaven which we altogether revere above all earthly kings. What has happened in Svolvaer Lutheran church is a symptom of spiritual sterility in the kingdom. Before it is too late, the self claimed missionaries, the architects of humanity who love to be idolized as a latter-day Samaritans, need to understand JUSTICE and CHARITY are SOUL and BODY that live together inseparably. If detached, charity/body is absolutely DEAD!

As Easter is approaching, I have a message for the parish. Since the deaf man told me he was crushed and dragged hard to sustain scratches, by chance, if you notice a mark of blood on the floor, do not sin for a mistaken judgment. It is not a blood of lamb to symbolize the invaluable sacrifice of Christ. Rather, it could be a blood of this man who was in a hunger strike. Doubt it as a blood of one deaf asylum seeker to vindicate a shameful act committed in front of the vicar; a real justification for the death of justice on Christians’ land, inside the house of God.

I am not Christ and the Ghetto we are being tormented in is not Gethsemane to conclude with the pertinent verse “Watch and pray so that you will not fall into temptation (Matthew 26-41.)” Rather, I would say: WATCH and PLAY IT HARD.