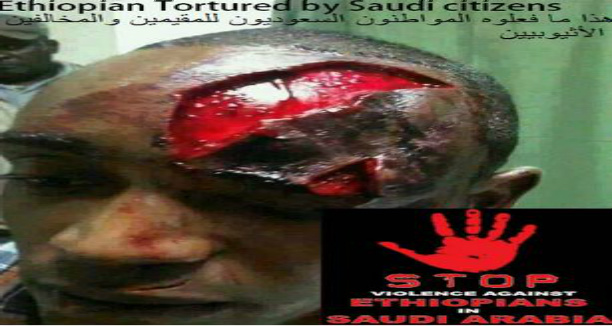 For Them, Petrol Is All About Life and Soul.

Ethiopia has evolved from being a melting pot to a furnace that burns and melts all the rest to the like of its “master race.” The quests for political and economic equality are being answered everyday with bullets, beatings, and arrests by the government. Most of us who have sought security by immigrating far away have found servitude, psychological torture and killing.

Honestly, I feel angered but not amazed on what they are doing right now in Saudi. This is what they are since the time of genesis. For them, crude is valuable than blood. They have no conscious mind. Their petrol is all about life and soul.

It is foolishness to ask Ethiopian government to interfere on the matter. In its entire year of power, if TPLF have taken any action for the benefit of the nation, it should be only by accident and deserves a chapter in the history book of the world. Otherwise, who would allow such crimes to be committed against its people? How could the state leaders and ambassadors remain silent? Wherever happens, when the safety and dignity of citizens fall in danger, any responsible state must have no economic interest to consider, no political ties to spare. It shall be swift without any specific and limited character of diplomacy to ensure legal order and legitimacy. Nevertheless, we, Ethiopians are not lucky for this.

If I call out Ethiopian government to take measures against these injustices, I am simply rocking to wake Egyptian’s mummies. But, where are the rest, the Imams, the priests, the pastors, all the spiritual leaders who received Mosses’ scepter to look after His flock? Why are they so quite or say just a little to shout on behalf of the “slaves” on the Arabian Gulf? Are they left to the Parliament, looking for the “lost sheep?” They have been fooled. They are tiring themselves in vain as what they find there are wolves in sheepskin.

I know. It is not easy. A country like ours, with low economic and financial strength has no political weight. It is neither respected as a friend nor feared as an enemy. For this very reason, we must bring the only resource we have, the voice, to shout as one in ear piercing tone. At this moment more than ever, we shall come together. This is what our culture commands us to do. Our brothers and sisters in Saudi Arabia await us today. They know that the Ethiopian regime’s treachery has reached the peak. No one count on them to stop the harm. 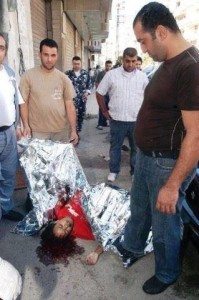 For us, this is high time to pay the ultimate sacrifice for the sake of our brothers and sisters. We are their only hope to stop this massacre regardless the legality or piety of the required measure. I know we are decent. Yes, the nation is religious. Men and women of the church could kneel and pray until the Day of Judgment but no one is capable to relive St Paul, shatter the door of the prison cell to set free a single soul.  For those hypocrite men, I may sound a demon but the urgent safety and security we demand can be served only and by any means at hand. A secular action is the only remedy to a secular injustice.

Here at this paper, I shall call all political parties to do more. Leaders, engaged in peaceful or armed struggle, should understand the true treasures of their parties are people that must be reached out not only during political procession and objective demonstration, but also in such a time of deep social recession. This is like “show time” for both earned and self proclaimed politicians to be real leaders and guides. Let us see you taking more tangible measures to stop the murderers. I am not saying that we will sit behind; rather, would come forward with all resources we have. I bid you to take the lead as you have already made the name and fame to organize the mass, to be answered whenever you call.

As we are in a grave and urgent social duty to ransom the nation’s esteem, I shall address both ends.  How could I prelude? Prime or Pastor Minister, in case if you ever forget, anyone above the age of eight is too old for such a political pillow fight. Save us your “imminent threat of terror” to a Sunday sermon and hurry up to ransom the defenseless from those merciless.

Those of you who foiled “the assassin plot,” I gave you a big hurrah but put that rhetoric in the “pending” file. You got something dear to act up on. This is one of your wars. More than conquering the corridor or whole area of the enemy’s land, the most daring and cheerful victory of your party shall be the one it possesses on the battle for the people’s heart, mind and soul. Reach them now in this time of adversity. Sow the seed of freedom in the nation heart. Even if it is painstaking and slow, be patient, let it sprout and grow, then you will know. There is no land more fertile and wider than it, to surprise you with the surplus fruits. After all, in order to intercept TPLF’s recently adopted weapon of moral destruction, what is demanding seems to be armored underwears instead of mortars.

This is my “may day” call, on behalf of brothers and sisters on the Arabian Gulf, to the whole nation except those opportunist citizens who trade on the blood of unfortunate fellow victims. If there is anyone who unfolds a screen on the street and projects how Alem Dechassa was tortured and killed, thinking that “useful for his asylum case,” he is a rotten, walking DEAD to me; whereas, the unfortunate Alem is still alive in my blood. I will never pass injustice with closed eyes whether it is committed against my own people, Eritreans, Somalis, Afghan, Palestine, or any other nation. Calling a candle vigil for Lampedusa victims while forming burning candles in the shape of a heart with epitaph that reads “Ethiopian Refugees Need Protection” is greed and gross for my eyes. No one could speak for the dead. No one feels the real pain of those who have been raped, tortured and mutilated. Therefore, no one deserves their dream they had been deprived to live. It has to be buried with them! It is my firm belief that one person with the sword and sheath of truth can make a difference, a difference of life and death. I shall shiver alone like a winter leaf of a tree than getting warmth in the company of vampire nationalists.

Once more, Dear Ethiopians, let us show our brothers and sisters that they are not alone; that we are not forgetting them. When their voices are choked we shall lend them ours. They need us and we need them in such a time of mayhem!