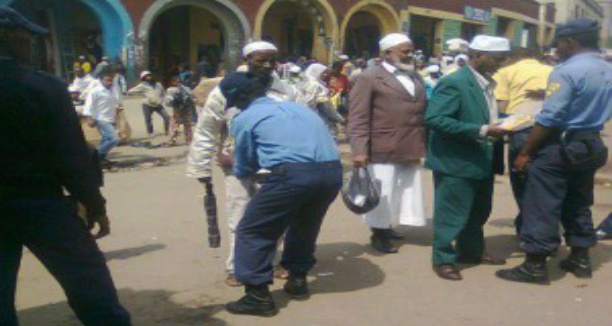 Today, The Country Is Not Drifting Away By MUSLIM TERRORISTS, But By TPLF TERRITORISTS

Here again, on 3rd of August 2013, the brutal killing machine of EPRDF has executed more than two dozens of innocent Muslims who were out in peaceful demonstration. As if losing their spare less life for its bullet is not enough, the Ethiopian government is trying to stain their epitaph, naming them Jihadists. Whatever name or pretext is being fabricated to ratify the massacre, there is no other means to justify this end of brutality except the regime’s trademark of inhumanity.

These days, it has become a fashion to categorize fundamental right of Muslims with extremism and tagging their civil right activists as terrorists. Here, I want to explain myself loud and clear that I am against any form of killing civilians no matter how much injustice and oppression one is subjected for. As far as I know, leaving aside the God or Allah sent messengers, Christ and Prophet Mohammed, any ordinary follower doesn’t advocate killing of humans that created in the image of God. Therefore, in both religion and ethics wise, there is no cause on earth to justify these killings. Even if there are some believers who practice the rule of gun under the cover of religion, I strongly oppose any kind of inductive argument that connects terrorism with Islam or Muslim.

Yet, I believe that except those traits that determine our color, height, and physical figure, there is no code of gene in our DNA that makes us decent or terrorist, killer or savior, better or worse by birth. It is the environment which one is being treated in finally dictates how the individual lives or acts. It is foolishness to expect people under the heavy yoke of a tyranny to keep living on their knees instead of being determined fighters for their freedom. Here, I want to quote what Emperor Haile Selassie I said to the united Nation, NY in 1963:

the philosophy which holds one race superior and another inferior is finally and permanently discredited and abandoned, everywhere is war and until there are no longer first-class and second-class citizens of any nation, until the color of a man’s skin is of no more significance than the color of his eyes. And until the basic human rights are equally guaranteed to all without regard to race, there is war. And until that day, the dream of lasting peace, world citizenship, rule of international morality, will remain but a fleeting illusion to be pursued, but never attained… now everywhere is war.Emperor Haile Selassie I

In Ethiopia, it is really a difficult time for us and Muslim brothers. More than ever, with all these tribal and religious segregation, our history of living together as good neighbors is in danger. What the dictatorial government doing now is not fighting terrorism, but deliberately destroying the melting pot nature of the country; creating unhealthy divisions of race and religion in the society. Right now, it is not our SECURITY which is in critical threat, but our UNITY. Today, the country is not drifting away by MUSLIM TERRORISTS, but by TPLF TERRITORISTS who believe to prolong their power by playing the old game: «divide and conquer.»

The whole nation must unite and start to knit and knot every rope at hand, make strong nets to fish out these sharks that enjoy swimming pure blood of innocents. I believe that this unity starts by redefining two basic concepts. As all Muslims are not terrorists, not all Tigrians are territorist or tribalist. Among us, there are a lot of tigrian brothers and sisters who follow the life of Mosses, choosing the people over the Pharaoh and his palace. It is the game of the regime that tries to create a hierarchy of dominance among nations and nationalities to secure a privileged group who would think their survival or removal is strongly tied with the regime’s fate. I can not deny the existence of Tigrian ellites that look at their own situation and don’t bother what all the fuss is about as long as their interest or livelihood is secured. Otherwise, as before, still today, there are lots of men and women of Tigray who firmly stand for the oneness of the nation against any tribal, religious, or linguistic segregation.

Finally, you men of war, if you have ears, listen us this: we know that those who died at your hand were not Jihadists but innocents who exercised their legitimate right to ask for the release of their imams (leaders.) Whatever name calling you are doing, nobody buy your war cry. We have already realized and joined the cause our Muslim brothers are killed for, and never give up till we win the fight. Rather, stop your train before it crush and claim more life in and out of the locomotive. We ask you to stop not because you reached the station, trust us, you have come far beyond that. We ask you to stop because you have come to the last bar of the steel rails.